Bees, Wasps and Hornets
Are you experiencing a Bee Wasp or Hornet infestation in or near your home or business? There are several types of Bees and Wasps and Hornets that may appear in your yard, and any of them can be cause for concern if you spot large groups, swarms or nests. Bees are generally small and bulbous with fuzzy bodies and dark legs. Wasps are longer and their bodies contain three distinct black segments with yellow bands or spots along with spindly legs and wings.
Bees usually build hives while wasps construct nests. You may find these in trees, in the leaves on your roof or even inside walls. The closer the "home" of the insects, the higher the potential that they'll wind up where you don't want them. At Dependable Exterminating we offer Fast, Safe Stinging Insect & Nest Removal. Give Us A Call Today @ 1-844-305-8999.

Mosquitoes
Few animals on Earth evoke the antipathy that mosquitoes do, mosquitoes are the deadliest animals on Earth. Their itchy, irritating bites and nearly ubiquitous presence can ruin a backyard barbecue or just a walk outside. Mosquitoes pose a triple threat to our health in the form of dengue fever, chikungunya, Zika virus and the West Nile virus can all be carried by infected mosquitoes and can be transmitted to animals, birds and humans. If you have a mosquito infestation call our Rockland County Exterminator at Dependable Exterminating to solve your mosquito problem.
Mosquitos are not only a nuisance but they are a public health problem as well. Finding the source of a mosquito infestation is a priority in the overall elimination process. Our technicians at Rockland County Pest Control will locate the source around your home or place of business and take the necessary steps to eliminate it.

Moths And Webbing Clothes Moths
The most common, the Indian meal moth was given its name after an insect scientist found it feeding on corn meal, also known as Indian meal. From wing tip to wing tip, adult moths measure from five-eighths of an inch to three-fourths of an inch long.
Clothes Moths can be very destructive pests of wool, furs, and other natural or blended fabrics. The webbing clothes moth tend to hide when disturbed, so you might not notice you have an infestation until after the moths have already damaged your fabric, fur, or feathered items. Close examination of the objects will reveal silken webs the larvae have spun.
The Webbing Clothes Moth is the most common fabric moth. The adult is gold with reddish-golden hairs on the top of its head. A row of golden hairs fringes its wings, which have a span of about 1/2 inch. Because these moths are weak flyers that aren't attracted to lights, you'll usually find them close to the infested items, such as in a dark area of the closet.
At rest, clothes moths are only about 1/4 inch long, while most food-infesting moths are about double that length. Clothes moths usually fly around only the immediate area of the house where the infestation has occurred, and their flight pattern is distinctive—they tend to flutter about rather than fly in a direct, steady manner as do food-infesting moths. Food-infesting moths also don't have the little tufts of hair on their head. If you've seen a moth or two fluttering around but aren't sure if you have an all-out infestation or if you see you have Clothing Damage call our Rockland County Pest Control experts. Our Rockland County Exterminator is trained to combat these damaging pests. 1-844-305-8999. 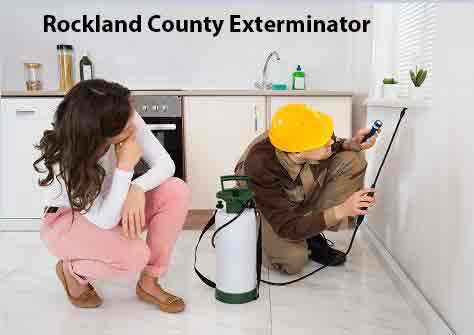